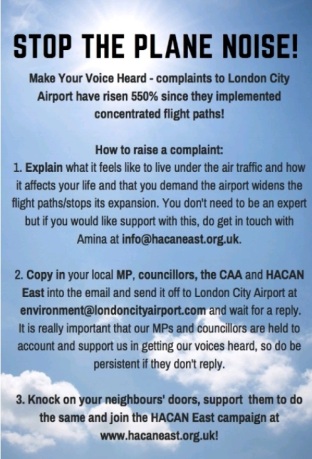 Local residents have reacted with anger to a report published by the Civil Aviation Authority which backs controversial changes to London City Airport flight paths.

The report assessed the impact of more concentrated flight paths which were introduced in 2016 and recommended that they remain in place.

While acknowledging there had been “both negative and positive impacts”, the CAA felt there had been a negligible change in noise levels for residents living underneath the flight paths which direct planes over Wanstead.

The CAA did ask London City Airport to examine why the proposed fuel and CO2 savings from planes following the new flight paths were less than predicted and queried why aircraft were flying slightly off the predicted routes.

“There is anger and despair that the CAA has backed concentrated flight paths,” said John Stewart, Chair of HACAN East, the campaign body representing residents affected by flights from London City Airport.

“Many people hoped that this report would end two years of misery and they would be able to get their lives back. This decision is a cruel blow to them.”

“This will not be the end of the matter. We had support from a wide range of politicians in calling for an end to concentration. These included the Mayor of London, leading members of the Greater London Authority and lots of local councillors. We will be liaising with them about next steps.”